My heart goes out to the victims of this senseless attack.  HSFA officials have been working tirelessly to gather resources to build active shooter training facilities with public access.  We have spoken with members of the community and for years have encouraged businesses, security companies and schools to participate in our active shooter training courses, which only cost about $15 per student, but we have been largely unsuccessful in convincing stakeholders of just how important raising awareness and getting training for staff is.  Unfortunately, another terror attack has occurred on U.S. soil; the worst in history.  We implore you to resist the urge to assume the cost of preparedness weighs heavier than the potential of having an attack or the burden of loss.  No one can predict when an attack will occur.  It’s imperative we work together to increase hometown security with vigilance. – Eric Brown, President/Dir. Public Safety, Homeland Security Foundation of America.

“An ounce of prevention is worth a pound of cure.” 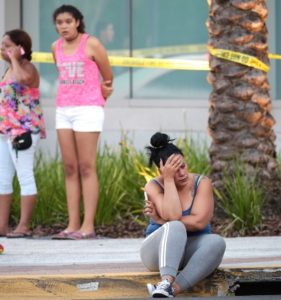 At least 53 more people were injured, Mina said. Police have shot and killed the gunman, he told reporters.

“It’s appears he was organized and well-prepared,” the chief said, adding that the shooter had an assault-type weapon, a handgun and “some type of (other) device on him.”

Officials warned that a lengthy investigation was ahead, given the number of victims and the scope of the violence.
“There’s blood everywhere,” U.S. Rep. Alan Grayson told reporters. “There’s an enormous amount of evidence to be collected.”

Orlando Mayor Buddy Dyer said he had declared a state of emergency for the city and has requested the governor do the same for the state.

Before Sunday, the deadliest shootings in U.S. history were at Virginia Tech in 2007 and Sandy Hook Elementary School in 2012, with 32 and 27 killed.

Law enforcement sources told CNN that the suspect had possible explosive devices strapped to his body and in his vehicle, but a U.S. official said later that no explosives were found.
At least nine officers were involved in the shootout, Mina said. Several coroner vans were seen traveling toward the nightclub.

The shooter is not from the Orlando area, Mina said. He has been identified as Omar Saddiqui Mateen, 29, of Fort Pierce, about 120 miles southeast of Orlando, two law enforcement officials tell CNN.

Orlando authorities said they consider the violence an act of domestic terror. The FBI is involved. While investigators are exploring all angles, they “have suggestions the individual has leanings towards (Islamic terrorism), but right now we can’t say definitely,” said Ron Hopper, assistant special agent in charge of the FBI’s Orlando bureau.

Authorities are also looking into the possibility the attack was a hate crime, a law enforcement source told CNN.

The shooting began around 2 a.m., and an officer who was working at the club responded, Mina said. The officer engaged in a shootout outside the club, after which the gunman ran into the club.
“That turned into a hostage situation,” Mina said.

Authorities were getting calls from people inside the club but away from the gunman, the chief said.
More police rushed to the scene and broke down a door with an armored vehicle, helping some 30 club-goers flee to safety, Mina said. At that point police shot and killed the gunman, he said.
CNN affiliate WKMG video captured clubgoers carrying injured people from the club.

“It’s just shocking,” said Christopher Hansen, who was inside Pulse. He heard gunshots, “just one after another after another. It could have lasted a whole song,” he said.

Hansen was getting a drink at the bar when he “just saw bodies going down,” he said.
When the shots erupted, he hit the ground, crawling on his elbows and knees, before he spotted a man who had been shot.

“I took my bandana off and shoved it in the hole in his back,” Hansen said, adding that he saw another woman who appeared to be shot in the arm.

The nightclub posted on its Facebook page shortly after the violence began: “Everyone get out of Pulse and keep running.”

Orlando police warned residents to stay away from the area, and urged people not to call their offices. They declined to provide the number of casualties, saying details will be available later. Bomb sniffing dogs are on the scene.